Some time ago, I purchased a super-cheap RF signal generator on eBay from fly_xy.  It was the same as this item.  This is yet another version of the the popular BG7TBL signal generator and “simple spectrum analyzer”.   It cost $65 and covers 138MHz through 4.4G; for another $20, you can get one that goes down to 35MHz.  It’s certainly not lab gear, but for the price and size, it’s still decent; the main challenges are the software and the resolution bandwidth. 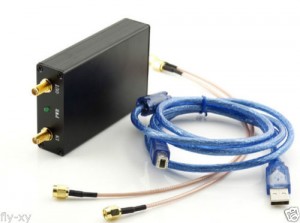 A review (translated from Polish) that measures harmonics and frequency accuracy and such:  http://sztormik.com/Radio/Wpisy/2014/10/1_BG7TBL_measurements_files/bg7tbl_lo_meas.pdf

It would be *much* more useful with selectable RBW filters; as it is, I can’t resolve much detail finer than 200kHz, so an FM signal with 25kHz deviation will look the same as an FM signal with 100kHz deviation.  See the pictures below for some sweeps of the 2m band.  The NWT4000 or NWT4000-2 might be more capable (but they are sufficiently more expensive that it would be better to buy a real piece of lab gear like a used R&S CMU200 – even though it is admittedly much larger). 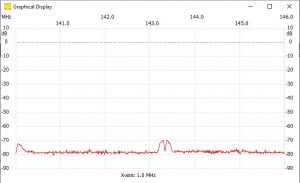 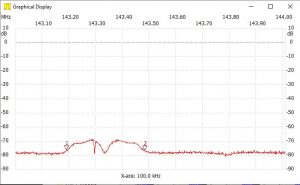 Close-up of signal in 2m band

The software it uses is open-source LinNWT / WinNWT which supports many similar devices.  The English language documentation is not great and because the native language is German, there’s not much English language support.  A German magazine article is here it looks like it would be very useful if translated into English.  The author (Andreas) is friendly and helpful and responds to email.

To run WinNWT in English on windows, use the command (in the Target field of the shortcut properties):

To build/run the software on linux:

I also bought the BG7TBL “tracking” (i.e. broadband) noise source in the hope of being able to do some basic antenna return loss/swr measurements; it does generate broadband noise at around -40dBm, but so far I’ve had no luck using it with the “simple spectrum analyzer” and a return loss bridge to sweep an antenna. 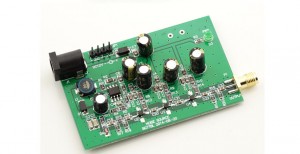