I recently purchased an Owon VDS1022 USB oscilloscope (two of them actually).  I’ve wanted a USB oscilloscope on my desk for a long time.  A USB scope *should* be much less expensive than a bench scope since it relies on the PC for its user interface and processing power, however I’ve tried several low-cost USB scopes and they have been disastrously bad due to low sample rates and awful software.

I ordered the Owon VDS1022 from Amazon for $80 shipped or $108 for the isolated version.  After some initial tests, it looks pretty good!  It’s main constraint is the 100MS/s sample rate, however if you can live within that bandwidth constraint it does quite a good job.  I fed it sine waves up to 25MHz from my signal generator and it reproduced them faithfully.  Square waves are, of course, tougher since they contain so many (infinite) high frequency components, but up to 5MHz it is very good and even at 16MHz, it does a decent job.  At 16MHz, you’re only sampling ~6 points per cycle so the waveform displayed may be greatly smoothed with higher frequency details lost (for example, you won’t see sharp edges or higher frequency ringing), but it is still good enough for many of my needs.

The enclosure is aluminum and looks and feels solid and high quality as does the USB cable and  the two included probes (although the probes are only rated for 6MHz at 1x and 60MHz at 10x). The rubber bumpers on the end are probably good for portable use; they can be removed and the silkscreen is duplicated underneath.

The software is very nice.  It installs perfectly on Windows 7.  On Windows 10, it was another story; eventually I figured out that after installing the software, you need to plug the scope in and install the driver manually from the Windows Device Manager (find the scope in the device manager and then update the driver (which in my case was in C:\Program Files (x86)\OWON\VDS_C2\USBDRV), once you have the driver installed, the software works well on Windows 10.  Sadly, the software doesn’t work at all on Linux, even under Wine; the issue is the USB driver.  The software is intuitive, fast, and the interface is clean; I never had to refer to the manual.  It measures frequency automatically and they’ve added keyboard shortcuts for some of the most common operations (vertical and horizontal scales up/dn) which are *very* handy…I wish they would add a few more keyboard shortcuts, especially run/stop, single-shot re-trigger, and vertical position.  The software includes an extensive set of automatic measurements under the Math settings including spectrum analysis (FFT); on the big PC screen you can have many measurements active without cluttering the display.

At this price, the VD1022 seems to hit the right price-point for its feature set; it’s a no-brainer to choose it over the Hantek or SainSmart low-end USB scopes.  If OWON drops the price a bit on their faster USB scopes, I’ll probably buy one of those too.

Update: 12/8/2015: I was curious to see if the non-isolated scopes could be upgraded and sure enough, remove 8 resistors and install two ICs for power and signal isolation (U37: ADUM3160BRWZ-RLCT, U9?: DCP20505U) and the scope works and is isolated (at least no DC connectivity)…the cost was just under $40 for two scopes ($20 each).

Update: 7/8/2016: I like these VDS scopes so much that I bought a VDS2064 (60MHz, 4 channel, LAN interface).  I haven’t figured out the LAN interface yet, but I can confirm that it works nicely over USB with Windows 10 (requires the same manual process for installing the USB driver described above).  I now have a VDS on my work office desk, home office desk, and in my robotics backpack.  After purchasing these USB scopes, I haven’t turned on my traditional bench scopes except once to look at a VHF signal (had to use my old 500MHz 5GS/s Tek scope).

The Rigol DS1052E is a fantastic oscilloscope and an amazing value at $329.  It is every bit as good as my favorite Tek scopes (maybe even better) at a fraction of the price.  I have previously owned/used budget scopes (Owon, Wittig, etc.) as well as Tek and HP scopes and this is hands-down my favorite. 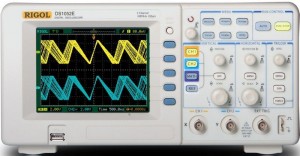 There is a software-only hack to convert it from 50MHz to 100MHz bandwidth…I’ve done the hack and can confirm it works.

The only problem with the scope is that the fan is 36.5 dBA (very) loud.  I finally got around to replacing it with a 22dBA Xilence 60mm case fan (less than $10 shipped on eBay) and it is now delightfully quiet.  The Xilence fan spec says it moves 30CFM (more than the 21CFM of the original); it is audible, but inoffensively so: mostly noise from the air moving through the plastic case, not from the fan; it is dramatically better than the original fan.  Note: opening the scope case voids the warranty; the process is well documented and requires a T-10 Torx screwdriver (Craftsman 41473) which is also useful for opening Tivos.  I cut the connectors off both fans and used the connector from the old fan with the new fan.

Warning: if you open your scope, please make sure it is unplugged and observe proper AC safety procedures.